“Everyone in class looks better than I do in the poses.”

“I’ll never be able to do it like the pictures.”

These are some of the comments I’ve heard more than I’d like to as a yoga teacher. But the truth is a lot of people are frustrated doing yoga these days. We all know that the yoga consciousness encourages us to ‘go within’, close our eyes and not compare. But face it, in America we are, for the most part, always going to be driven by comparisons. We see it all the time on TV with reality game shows where only the best get rewarded. We see ads in newspapers and magazines telling us how much better we could be if we did whatever they were selling. And then we see the yoga journals and books showing pert, pretty young babes doing impossible asanas that only could be achieved by having hyper mobile-super flexible joints (which is why those models got the photo shoot).

The one thing we have lost sight of in yoga is the basic anatomy of the body. We are encouraged to be like those (what I call) was a television clay animation back in the 50’s that could be flexed and twisted every direction), instead of accepting ourselves for our hereditary anatomy. Just because we don’t have shallow joint sockets, or long extremity bones or whatever those models in yoga magazines have in order to get that deep pose, doesn’t mean we can’t enjoy yoga for the stretch it gives our individual bodies.

In my classes I talk about bone structure and bone compression and how certain joints will never achieve “the perfect pose” not because the muscles are or aren’t loose, but because genetically, a bone can’t compress beyond a certain level of degree. We are all built so differently, and for the majority of us, achieving an asana like those in the magazines will be impossible – again, not because we haven’t stretched our muscles enough, but because bones can only go so far before they come into contact with a supporting bone (at a joint) and have to stop. Often times that stopping point is far short of the “optimum pose” in yoga. Does that mean the pose is wrong or a bad?  No, it simply means a person has reached their natural limit in what their body can achieve in the pose.

I recently took a workshop with Paul Grilley, who teaches Yin Yoga and the concepts of yoga anatomy. He talks about Aesthetic Yoga versus Functional Yoga. From my understanding, Aesthetic Yoga is what you see in the current books and magazine. Apparently back in the 1970’s all the yoga books were being rewritten and edited away from showing a master yogi (usually an elderly swami in a loin cloth doing his version of an asana), to a radiant Gumby-girl or boy, looking ever so beautiful and clever in their poses, with perfect alignment and fabulous range of motion. This then became the new rage that we all needed to attain if we were ever going to get to yoga heaven (to paraphrase Grilley). The original poses that the swamis demonstrated, and that focused on the function of the pose, became outmoded and replaced by the aesthetic version geared towards beauty and hyper-mobility. On Paul Grilley’s website, there is a fascinating “slide show of various bones”  that show the inconsistencies and irregularities of a “normal” bone. Because bones grow in spirals, each has the possibility to shift and change according to our hereditary, diet and general physical makeup. In other words, no two bones are shaped exactly the same, and because of that, no two people will be able to duplicate the same yoga pose exactly like the other. *Depending on where one bone meets another bone in a natural compression dictates where we will end up in a yoga pose.*

So, instead of going for the textbook perfect pose, we should rather find out what the pose is functionally trying to do and concentrate on that aspect. For example, with this simple lateral stretch into the hip socket as demonstrated by my students in a UVA class, you can see one person has the ability to open wider than the next.

Does that mean the David is doing it wrong – or not as well as Maria is? No! Functionally, they are both at the optimal stretch that their limbs can achieve. Could it be argued that Maria’s looks better aesthetically; that hers is more textbook perfect?  But who do you think is getting the better stretch and functionally might have the better results from this pose?  When one is hyper-mobile in a joint and hits the floor before they hit their joint’s full compression, then even though it looks great, it may not be as beneficial as with one who has to go to maximum range of motion without ever getting near the floor. It actually might be argued that David’s pose is functionally better than Maria’s, though Maria’s is more aesthetically better. There is no “right” or “wrong” to this pose. It’s just the difference between aesthetics and function and natural bone compression.

In this photo, again, Maria’s pose looks more like the magazine photos than David’s. Maria was born with the ability to flex her spine more, externally rotate her femur as well as abduct it more and compress her cervical spine more. I repeat – she was born with that flexibility. David wasn’t. David is functionally doing the pose as well as Maria, it just looks different, but his pose will be as beneficial to his bones as her pose is to her bones.

In the forward bends, the stretch of the hamstrings support the flexion of the spine. Even though Maria’s hamstrings stretch a little more than David’s, she also has more flexion in the lumbar spine and can bend closer to her legs. 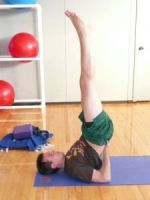 In supported shoulderstand the main emphasis is on the degree the cervical spine can flex. We also look at thoracic and shoulder extension and scapular. Maria has the natural ability to flex her neck almost to 90 degrees, which is what it might take to get the legs perpendicular to the floor. David’s neck doesn’t have the ability to flex towards 90 degrees, so he uses his upper thoracic spine to help his angle. But he will never be able to get up to perpendicular to the floor without severely hurting his neck, because his bones just do not compress that way. Of course he still is activating his abdominal muscles, strengthening his extensor muscles and is still compressing his thyroid, which are some of the functions of shoulder stand. So he is getting as much benefit from this pose as Maria. But he will never have the leg angle that she does. And it shouldn’t matter because the pose is working each of them to their best ability.

This is functional yoga at its most beautiful!

So, let’s recap on these ideas.

Check out the variations in downward facing dog.

All these students were given the same instructions  and have been practicing  this pose for 10 week. Notice that natural bone compression allows each of these people to look so different, and yet each is working to their maximum potential. 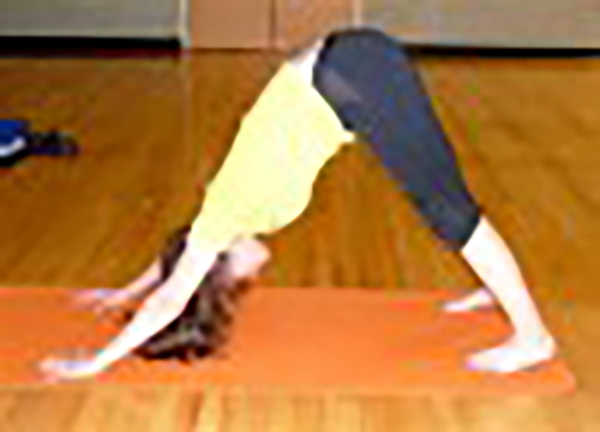 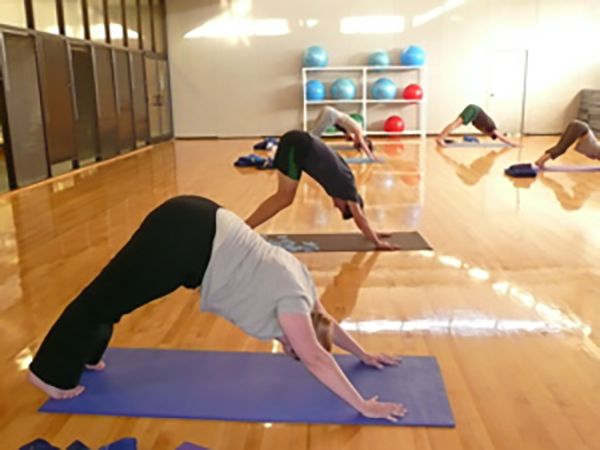