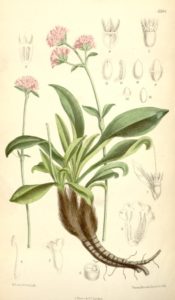 Although Spikenard is used very little these days, in the past this scent had achieved great popularity.  This was one of the early oils used by the Egyptians in their embalming recipes as well as for ceremonial purposes.  Spikenard is mentioned in the Bible many times but most notably as the oil that Mary of Bethany used to anoint the feet of Jesus.  In later times the Romans added Spikenard to their perfumes and cosmetics, specifically in a preparation called nardinum, which was one of their most favored scented oils.  Because of its great cost, it was considered an honor to receive a gift of spikenard, which usually was given in a beautifully ornate box, and which, legend has, could only be opened by the recipient of the gift.

Spikenard is extracted by steam distillation of the dried and crushed roots of the Nardostachys jatamansi plant.  It has a pale yellow/amber color with a woody, sweet-spicy scent.  “Nard” has been called False Valerian Root because of its similarity to valerian, though I frankly don’t smell the connection.  Valerian root has a very unique scent, unlike any other…

Therapeutically, spikenard is useful for skin complaints and can soothe irritated rashes and help heal dry scaly skin.  Added to a cream or lotion, it has rejuvenating properties that smooth out mature wrinkled skin and re-hydrate taut thin facial skin.  This oil also helps cool and calm inflammation and allergenic reactions on the skin.  Because of its regenerative qualities, this oil harmonizes and balances all skin function.

For the nervous system, this essential oil is particularly effective for nervous indigestion and queezy stomach.  When nerves are raw and fear sets off that uneasy churning sensation in the belly, then rubbing spikenard in a carrier oil onto the tummy in a clockwise motion, or inhaling the scent in an aroma lamp can reduce tension and fear and balance the system.  Likewise, rubbing a solution onto the temples will aid in relieving migraines and tension headaches, especially if the headaches were set off my digestive irregularities.  Speaking of which, spikenard can be useful as a laxative, again by massaging with it in a clockwise position around the abdomen.  This massage technique is also very soothing for menstrual problems.  Spikenard is also recommended for insomnia, due to its calming effect on the nervous system.

There is little question why spikenard was such a prized possession in ancient times, why it was so expensive and cherished.  Not only did it have to be imported over the Himalayas via India to reach the Middle East and Europe, but its spiritual qualities were well known and therefore sought after.  Spikenard carries a very high vibration, a frequency that enables a deep connection to one’s spiritual self and one’s inner being.  Its calming and quieting properties enable a deep state of meditation, almost trancelike in nature.  It encourages a kind of stupor that opens the higher senses to a keener receptivity whilst tuning out the mundane.  In combination with other aphrodisiacs, this oil also increases sensuality and heightens an awareness of touch.

As it is rarely used these days, it is often difficult to obtain, but if you can find it, you will enjoy a sense of the pleasures that were experienced in ancient times!