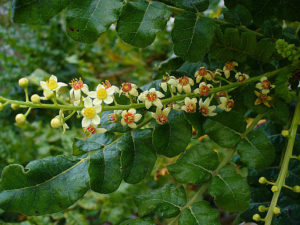 Since Egyptian times, frankincense has been used in rituals, cosmetics and perfumes. It has always been considered as precious as gold, and indeed was offered to the Christ child as a gift along with gold and myrrh. Frankincense has had a special affinity with the Christmas season because of this association as often one of the special holiday scents used in potpourris and candles is frankincense-- a particularly spicy and woody aroma that is well suited to this merry time. But frankincense, also known as olibanum, is used throughout the year for therapeutic purposes as well as in meditation practices.

Frankincense is obtained from the Boswellia carteri trees resin. A sharp cut is made into the trunk and the bark peeled back allowing a milky substance to drip out and harden into resin droplets. These resin drops can be used directly as incense at this point or else steam distilled down into an essential oil. In ancient times this resin came from Punt, which is present day Somalia, and was prized throughout Arabia, Egypt and Rome.

As an essential oil, frankincense is antiseptic, astringent, carminative and sedating. It also has diuretic properties and used in a douche is helpful for PMS and menstrual problems, as well as for urinary tract infections. Used in steam inhalations, this oil decreases cold symptoms and aids with bronchitis, coughs and excess mucus. It is a good expectorant and can be used as a gargle to soothe sore throats and release catarrhal conditions (although I personally think tea tree is a better choice for gargling).

Frankincense is also a great help with skin complaints. In summer as well as winter, dry chapped skin is often a problem and frankincense can soothe itchy cracked skin when added to a cream or ointment. It increases cellular regeneration, which means it can work wonders on aging skin and wrinkles, scar tissue, small surface wounds and blemishes and also is helpful with boils, pimples and skin ulcerations.

On a psycho-emotional level, frankincense is known to ease depression and mental anxiety. It has a warming, soothing effect on the mind. It releases tensions and nervousness and allows for a deeper more calming breath to enter the lungs. This oil also has a psychoactive chemical called trahydrocannabinole which is known to expand consciousness, hence is widely used in meditation and religious ceremonies. In olden days, people believed that by burning the “tears’ or frankincense, evil spirits (obsessions, tears, anxieties) would be driven away so fumigation of sick peoples rooms was regularly done.

This calming fragrance can also be considered an aphrodisiac as it molecularly mimics a sex hormone to awaken sexuality. By releasing the frenetic energy that comes with anxiety and fear, more energy can be channeled into creative activities, like meditation or sexual practices. By letting go of pent-up energy one can alleviate nervous worry, allowing more energy to be available for pursuit of calming activities.

There are some interesting stories associated with frankincense throughout history. In Babylon it was recorded that every year pounds or frankincense resin was burned during cremation rituals. This was done to provide a safe and protected journey for the departing soul, though probably, frankincense was added to a funeral pyre to mask the smell of burning flesh.

In ancient Rome, when Nero’s wife died (it was a tragic end because Nero apparently kicked his pregnant wife to death in a fit or jealous anger), at her funeral he burned all the frankincense that was produced in Arabia that year. He probably felt so guilty at his abhorrent behavior that he felt he needed to appease the gods by giving his wife a proper sendoff. Anyway, to this day frankincense is burned in religious ceremonies and the Catholic church uses frankincense regularly at high mass.

Frankincense resonates the “6th chakra”:http://www.suzannebovenizer.com/meditations/the-sixth-chakra-meditation-page which awakens higher consciousness and brings in the power of inner vision and intuition. It aligns the solar plexus chakra with the third eye to bring illumination and understanding of intellectual matters to a more enlightened awareness. It also allows for connection to the godhead, bringing in a higher frequency of integration throughout the chakra system. There is an energetic connection to the St. Germaine entity, and is considered a yang oil. Frankincense is acknowledged as a ‘new age’ oil (even though it has been popular throughout the ages), and will energetically help to bring in the new age of Aquarius.